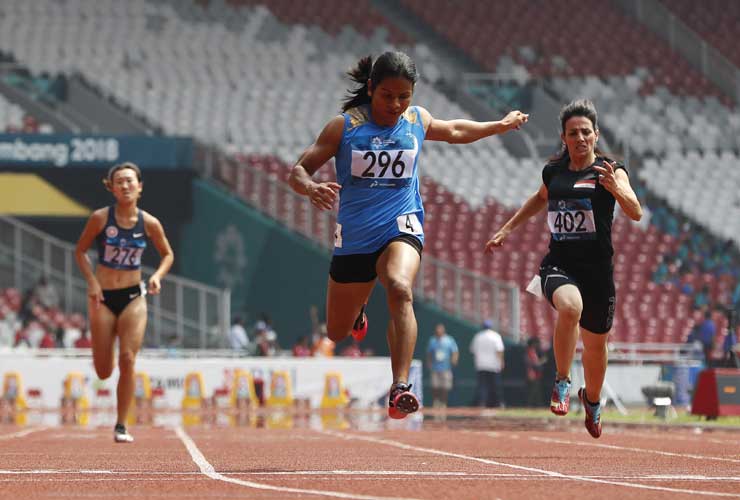 She won, becoming the first athlete to challenge an existing policy and emerge triumphant, wrote ESPN’s Susan Ninan. Then she brought home two silver medals at the 2018 Asian Games. Her 100m record remains unbroken in India.

Dutee’s fight has ramifications beyond her own case. Disorders of sex development are more prevalent in under-developed nations amongst poorer communities where they are likely to go undetected. Only this past week, runner Caster Semenya challenged CAS’s ruling against her for the same reasons of hyperandrogenism.

Now Dutee is back in the news and this time it is for becoming India’s first openly gay athlete. In an interview to Nihal Koshie of The Indian Express, she said she had found her “soulmate”, a woman from her village.

There were ripples of applause from home and around the world, from TV host Ellen DeGeneres and former Indian hockey captain Viren Rasquinha; editorials in The New York Times and Washington Post welcomed her candour.

The revelation has not been without controversy with Dutee saying she had to come out because her elder sister had been blackmailing her — a chilling reminder of how, despite the scrapping of section 377, discrimination against LGBTQ people often comes from their own families.

Dutee does not necessarily invoke the political language of activism and rights. She speaks of a “pure” connection with her unnamed partner and clarifies that there is no physical relationship, so far. Yet, she holds out hope to a new generation of Indians who now live in a country where same-sex relationships are no longer illegal.

“She’s definitely a role model,” Payoshni Mitra, an athletes’ rights activist who has known Dutee since she was 18, told me. “She has seen the world and is not afraid of saying, ‘This is who I am’.”

Being gay doesn’t make Dutee a role model. But in a money-obsessed, deal-making, PR-determined world where athletes are brands, she is an original who has the courage of her convictions and the strength to fight for them. This is a woman who knows that believing in yourself is not always easy, that truth can come at a cost. But she’s prepared to pay it.

Ultimately Dutee will be judged as an athlete — neither for coming out and nor for being gay. But for now, as the unafraid woman who challenged received wisdom, she has my vote.

This column first appeared in Hindustan Times on May 31, 2019