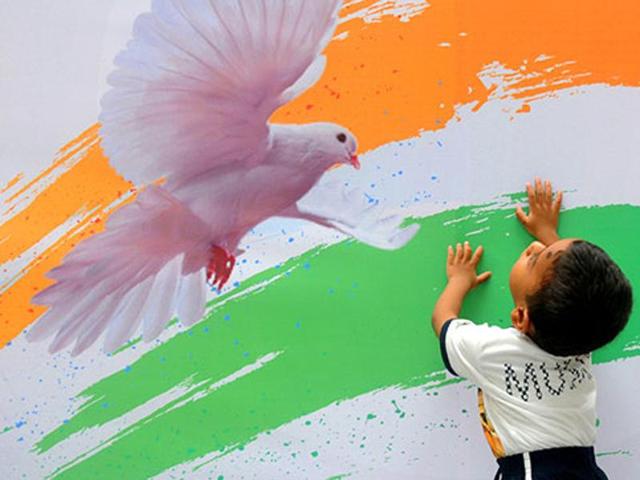 Now, forget about remixes, people who fail to stand during the playing of our national anthem are abused, threatened and ejected from movie halls by vigilante audiences.

It’s another matter that nobody seems to understand why it is appropriate to play the anthem before a movie. Is this some sort of ritual cleansing before the Munnis become badnaam and heroes start their pelvic grind?

As an aside: How many of us stand up when the national anthem is played while we watch the Republic Day parade on TV?

Personally, I like the idea of standing up, and would do so for every anthem of every country. I believe our national anthem reminds us of who we are as a nation; a confluence of ideas and identities from Sindh (no longer even in India) to Banga. I take pride in the fact that Bangladesh also chose for its national anthem a composition by Asia’s first Nobel laureate, placing, in that sense, brotherhood over borders. How can you not be moved?

Yet, equally, I recognise that the national anthem might not move everyone to the same extent: The mothers of Manipur and Kashmir, the victims of a riot, or perhaps even a new generation of questioning Indians.

In recent months, we’ve seen the growth of two trends: Hyper-nationalism, Mob vigilantism. The hyper-nationalists look back at the glories of a past Bharat and dream of the wonders to come in the days ahead (as a first step they would like to excise the word ‘secular’ from the Constitution). For these hyper-nationalists, any critique of India — whether it is intolerance or its treatment of women, whether it is real or imagined — is tantamount to anti-national behaviour. If the author of the critique happens to be a Muslim then what follows is the predictable go-to-Pakistan advice.

Even Vice-President Hamid Ansari is not immune from being treated with suspicion. In June, his absence from the Yoga Day celebrations was questioned by BJP general secretary and RSS nominee Ram Madhav. The vice-president clarified that he couldn’t have been there because he had not been invited. Although Madhav subsequently deleted his tweets, the damage had been done and even today, the broader trend of questioning the patriotism of India’s Muslims has not abated.

The flexing of mob muscle whether at Dadri or on social media is not only against the spirit of India but, more crucially, is drowning out that important voice crucial to all democracies: Dissent. The act of speaking up, taking an alternative view, voicing a fear or just remaining seated during the playing of the national anthem comes fraught with danger.

If the Muslim family that failed to stand during the playing of the national anthem in Mumbai is seen as ‘unpatriotic’ then how should we view the actions of the crowd that ejected them and applauded as they left? Is this nationalism? Or goondaism?

The crowd at the cinema diminished the spirit of the national anthem by displaying the ugly face of mob violence. I believe that Tagore, who once said humanity must be greater than any nation, would have been ashamed.