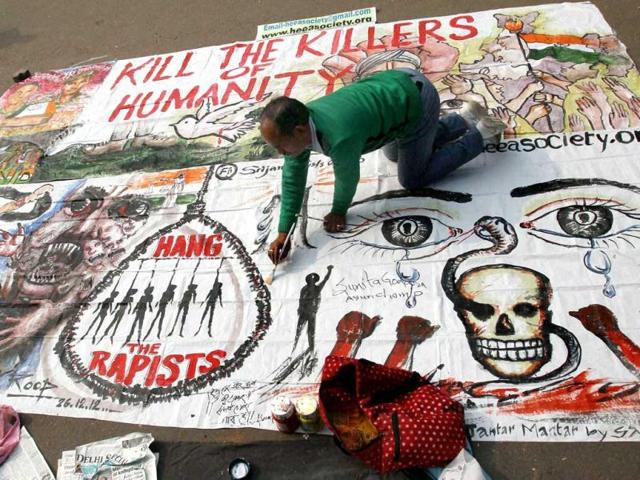 In the small room they call home, the family of the girl known as Delhi’s Brave heart is trying to come to terms with its loss. Already there is no evidence that she lived here only a month ago.

In the small room they call home, the family of the girl known as Delhi’s Braveheart is trying to come to terms with its loss. Already there is no evidence that she lived here only a month ago. Her books and clothes have been packed away, although her brother points to a physiotherapy textbook that somehow got left out. On the front cover, a name has been scribbled in pencil on the top corner. It’s a neat scrawl, as if unwilling to take up more than its necessary space. I can only wonder how a girl with such a big spirit could have had such a tiny handwriting.

The father, his face a stoic mask, doesn’t want to hear the old story repeated. But the mother recounts the events of that night of December 16, how the family began to worry when it began to get late, how they tried her mobile but couldn’t get through, the call that finally came from the police, the autorickshaw ride on a cold night to Safdarjung hospital, the sight of a girl, your girl, so frail on the bed. You don’t know yet what has happened. You don’t know yet the extent of her brutalisation, the iron rod, the man who sat across her chest yelling, “Mar saali.” You only touch her hand, her eyes open, she sees you and she begins to cry.

“I stood by her bed, refusing to cry because I knew if I cried it would upset her,” the mother says. Now her tears won’t stop.

The family seems bewildered by the turn of events. The elder of her younger brothers sits on the bed asking how the juvenile – apparently the most depraved of the six men who raped and assaulted his sister – could get away. The mother huddles underneath a scarlet blanket, her sharp features accentuated on a gaunt face, and questions the logic of a system where a man commits the crime of an adult but gets treated as a child.

The family doesn’t understand how the legal system works – why should they? They have not been to court, yet. In the legal process they are peripheral, the family of the ‘victim’. It is the friend (the brother calls him ‘bhaiya’) who was with the girl who is a key witness. He will identify the accused. He will testify. He will narrate in a fast track court in room 305 in the Saket District Court what happened in the bus that night.

I ask the family about the Verma Commission report which acknowledges that the gang rape and death of their daughter was the ‘trigger’ that led to the ‘country-wide peaceful public outcry of civil society’ and the setting up of the commission itself. They listen but ask only why it doesn’t have a provision for the death sentence for the sort of men who killed their daughter. They want to know why it is silent on the juvenile justice provisions. They do not complain but they were not called before the commission. Nobody asked them what they want. The legal system did not include them. It simply appropriated their daughter as a martyr and symbol for change and left out the family.

The father will eventually go back to work as a loader at Delhi airport. The brothers, like their sister, are good students. The elder brother, in Class 12, has his engineering entrance exam in April, although he has missed his coaching classes. His younger brother is in the 10th grade and dreams of becoming an astronaut.

This is a family that dreams big. This is a family that sold its land to educate their eldest child in the hope that she would one day support it. Now that child is dead, the investment in her hope is gone. Somewhere in the city, protesters continue to shout: ‘We want justice.’ For this family justice is not a ray of light at the end of a legal tunnel. There is no closure. There is only picking up the pieces and getting on with life.