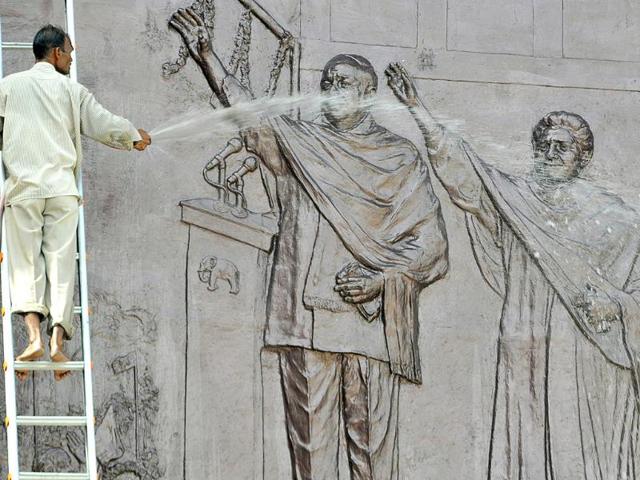 A memorial is not just about building the tallest, biggest, grandest statue.

On the day before his death anniversary, BSP head Mayawati was disrupting Parliament to press for a memorial to Bhim Rao Ambedkar. The government was scheduled to make an announcement at noon. “Why not now?” she asked as members of her party rushed to the well of the Rajya Sabha.

When the announcement came a few hours later to hand over 12.5 acres of the defunct Indu Mills in Mumbai’s Dadar, not far from Chaitya Bhumi where Ambedkar’s ashes are interred, Mayawati was not impressed. “For a grand memorial,” she scoffed, “at least 30-40 acres of land would be required.”

If anyone deserves a memorial in this country, it is Ambedkar. The scholarly architect of our Constitution belongs to every citizen, not just to Dalit parties. A fitting memorial would celebrate his life and serve as both inspiration and rebuke to continuing social inequalities. It should also help to chastise those who disrupt the constitutional methods established by him.

Plans for the ‘grand memorial’ have been unveiled by Ambedkar’s grandson, Anandraj who last year had forcibly occupied Indu Mills to erect a makeshift memorial. They include a 109-metre high statue (16 metres taller than Liberty, it will be called, yup, The Statue of Equality). In addition, there will be a lotus-shaped convention centre, a banquet hall and a library.

A memorial for Ambedkar is far too serious a matter to be left to his biological family and parties trying to score brownie points. There is need to call for nation-wide submissions and to scour national talent: how do we best remember this remarkable Indian? Is this about tallest, biggest, grandest or do we need something more laden with meaning? Exhibits from his life? Lush gardens or a starker landscape symbolic of oppression? Or do we need yet another statue, a token towering pit stop on a tourist circuit?

Because we are a land susceptible to multiple gods, we have become a nation of adept statue-builders. Yet, popular imagination seems to flail at the idea of memorials. We have reduced the concept of a memorial to simple mathematics: Memorial = Statue. If a memorial is to commemorate a life, or an event, what can a statue, no matter how tall, really tell us?

For dramatic effect try the memorial to the 17,000 killed by the Khmer Rouge in Cambodia which comprises a transparent acrylic Buddhist stupa encasing 8,000 human skulls. Or for experiencing another sort of untouchability, the Apartheid Museum in Johannesburg lets visitors chose their segregated entry, white or non-white. Closer home, who can fail to be moved by the starkness of the black granite slab at Gandhiji’s Samadhi at Rajghat?

In India, alas, we seem to believe that only Great Leaders deserve memorials. So while a thousand Kanshi Rams and Mayawatis sprout in Uttar Pradesh, we have failed to build a national war memorial. While we debate the height of a Shivaji statue (also to be ‘bigger than the Statue of Liberty’), why not consider a permanent memorial to the Bhopal gas tragedy or victims of the Emergency? Those who forget history are condemned to repeat it which is why all over the world there are so many memorials to the victims of the Holocaust.

Meanwhile, in Mumbai the BMC has served notice to mayor Sunil Prabhu and Shiv Sena MP Sanjay Raut to remove the makeshift memorial that has sprung up for Bal Thackeray at Shivaji Park where he was cremated two weeks ago. For now, let’s not get into the merits of whether Thackeray deserves a memorial. For now, only ask: what memorial best fits the man whose stated mission was the Marathi cause? A statue at Shivaji Park (and how ironic it would be to reduce a park named after Shivaji to accommodate his great follower) or an institution devoted to the spread of Marathi language and culture?

At the very least, our intrepid statue builders would do well do remember that statues are most beloved not by the admiring masses, but by pigeons.