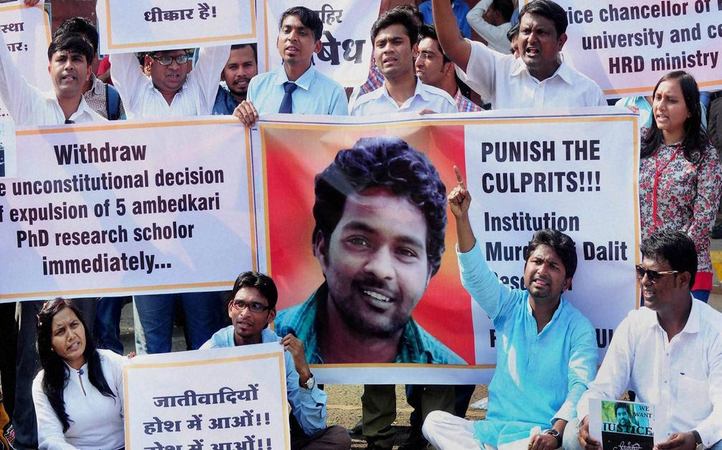 Rohith Vemula was not just any son. He was a Dalit son, and to ignore his caste is to ignore the significance of his life and death.

We did not flinch at the news that an eight-year-old Dalit boy had his arm amputated after he was thrown into a sugarcane crusher for ‘not working properly’ in Jaunpur, Uttar Pradesh.

We were not repelled when a seven-year-old Dalit child was hospitalised for six days after his teacher thrashed him for picking up a plate reserved for upper-caste kids for his midday meal at a government school in Osian, near Jodhpur.

When 17-year-old Anil Parashurama Methri was bludgeoned to death in Karnataka’s Mijri village in July after being caught trying to deliver a love letter to an upper-caste classmate, where was our outrage?

Submerged within the banality of violence, the death of Rohith Vemula might have ended up as a stray paragraph in the papers, but for the sustained agitation that began with a group of students of the Ambedkar Students’ Association at the University of Hyderabad.

That outrage has now spread to 12 universities. Demonstrations have been held in Mumbai, Pune and Delhi even as they continue at Hyderabad where students remain on hunger strike and 20 faculty members have quit their administrative posts.

With the protest gathering steam, Prime Minister Narendra Modi finally broke his silence, after five days, to express his anguish over the death of a ‘young son of my country’. But after days of sustained bluster by BJP leaders, the regret could not stem the anger.

The postdoctoral research scholar was not just any son. He was a Dalit son, and to ignore his caste is to ignore the significance of his life and death.

Following a clash with the ideologically opposed ABVP, the student wing of the BJP, Vemula was suspended along with four other students of the Ambedkar Students’ Association, had his stipend suspended and was banned from his hostel and the dining hall.

That this social exclusion happened not in some dusty mohalla, but in a university is tragic — but not unusual. We expect universities to be the crucible of change, where students fired by idealism will at least believe in the idea of a new India where there is no caste or hierarchy.

Yet, within these crucibles, 11 students, mostly Dalit, are reported to have killed themselves in Hyderabad alone between 2007 and 2013. In north India, the toll is believed to be 14, between 2007 and 2011. In any university, anywhere in the world, students dying in such large numbers would have been an emergency.

In 2014, the India Human Development Survey (IHDS-2) findings on untouchability found that one in four Indians — upper-castes, other backward castes, Muslim, Sikhs — admitted to practising some form of caste untouchability.

This is not the routine discrimination rampant in villages where a survey of 562 villages in 11 states by the National Campaign on Dalit Human Rights found segregation practised in 38% of government schools. This is not the normalised rape of Dalit women by upper-caste men that continues in the villages of Haryana.

This is discrimination practised in our largest cities where we deny access into kitchens in the name of ‘hygiene’. We are squeamish about cleaning our own toilets — and just as squeamish about sharing them with those that do.

How does caste-discrimination continue in a modern, upwardly mobile society? In a week where we have just celebrated our 67th Republic Day, you cannot look at the death of a son of modern India devoid of its larger social context of exclusion.

In December 2012, the brutal gang-rape and murder of a young medical student led to nationwide protests and a conversation on gender equality and rights that continues to this day.

Already Rohith Vemula’s death has sparked new questions. On a news website, one writer documents how she had hidden the fact that she was Dalit. Now she can no longer remain silent. Her moving confession leads to a torrent of stories tumbling out and Yashica Dutt is now documenting them on dalitdiscrimination on tumblr.

Rohith Vemula wanted to be a scientist and a writer, not a martyr. Inadvertently he may well end up as one.