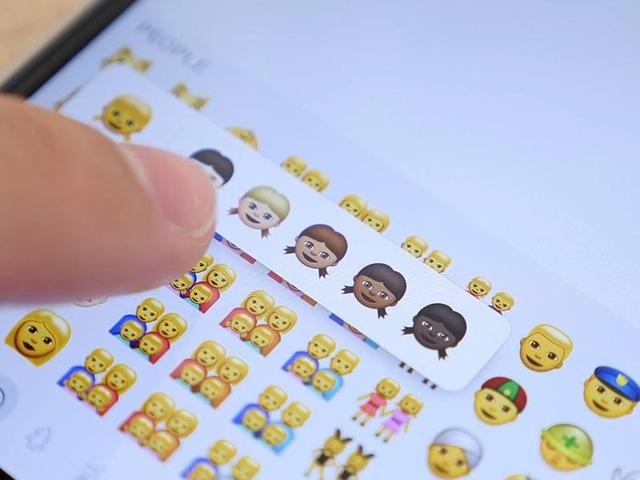 Language must evolve, not regress to a point where even 140-character tweets seem like essays. What an emoji says to me is this: I’m too lazy to type out thank you or sorry or well done. I’m too unsure about whether I can express myself without a symbol.

They’re everywhere. The text you send about a change in plans and the selfie you receive after a 5K run. Mercifully, neither the downcast face nor the thumbs up are tagged on the email from my bank credit card. But the emojis — a dress and pair of shoes — seem inevitable with the announcement of some sales promotion.

Bankers aren’t budding Shakespeares. But for the Oxford Dictionary to defect from words to declare that the word-of-the-year is not a word at all but an emoji — the laughing face with tears to be precise — is betrayal.

Yet, I’m not a purist. I am thrilled when a new word makes it to the dictionary, particularly when that word is something no Queen who ever spoke English would recognise. As Katherine Connor Martins, an editor with the Oxford English Dictionary (OED) — distinct from the Oxford Dictionary — announces the arrival of dhaba (India), mahala (‘nothing’, South Africa) and depanneur (convenience store, Canada), I send up a quiet cheer. Consider it the colonies’ revenge.

Over the years, I’ve applauded our coinage of batchmates and toppers and pass-outs and multi-starrers. Arre yaar, it shows the flexibility and reach of Indian English, no?

But I draw the line at emojis. It’s not just because my keyboard lacks an emoji convertor. Chinese script, yes, Hindi obviously. But my keyboard does not understand or speak emoji, which is just fine by me.

What does that teary emoji represent anyway? Are those tears of joy, laughter or frustration? I take an online know-your-emoji test and score a measly 21%. Those two palms joined together? Prayer? High five? Plea? Take your pick. And, seriously, we have an emoji for poop?

This 1,000-year-old language we call English is a laborious work in progress. Five years after the Philological Society of London began compiling a dictionary in 1879, it had barely reached ‘ant’. By the time the 10th volume was published in 1928, it was time for revisions.

That’s how it’s been with the OED since. Four times a year, its editors update, revise and add new words that enter the language. Some words tell us about the times we live in: Staycation, outsourcing, work-life balance. Some burst upon us unexpectedly. Who would have thought a word as liltingly beautiful as ‘vuvuzela’, unknown to most until the 2010 FIFA World Cup, could produce such a discordant sound?

There was no SMS before December 2001. We knew Islamophobia and ethnic cleansing long before they made their debut in 2006 and 2002 — the year that also saw the entry of feminazi (were these the folk that gave us the mercifully short-lived womyn and herstory?). Gay has always been around, but when did it become a noun more than a mood?

Rumour has it that the still-taboo four-letter word that begins with F is nearly 500 years old; its presence apparently evident in a 1528 manuscript. Yet, it didn’t make its dictionary debut until 1972, and by 2006, the OED editors conceded that they had fallen short as they diligently added variations from f***ability to f***face.

The stringing together of 26 finite letters to create such infinite variety is one of life’s greatest beauties. How do words evolve? What do they tell us about our lives, priorities, passions and interactions? In a world where we need to reach out, where arguments and situations require nuance and layer and where communication is already a series of LOL abbreviations, do we really want further brevity?

Language must evolve, not regress to a point where even 140-character tweets seem like essays. What an emoji says to me is this: I’m too lazy to type out thank you or sorry or well done. I’m too unsure about whether I can express myself without a symbol.

Sure, emojis can be fun; they do capture a certain universally recognised shorthand. If that pumped up muscle or dancing girl works for you, so be it. Just don’t pretend that emoji is a language, that those signs can replace words. And that a laughing-crying face can ever be a ‘word’ of the year.