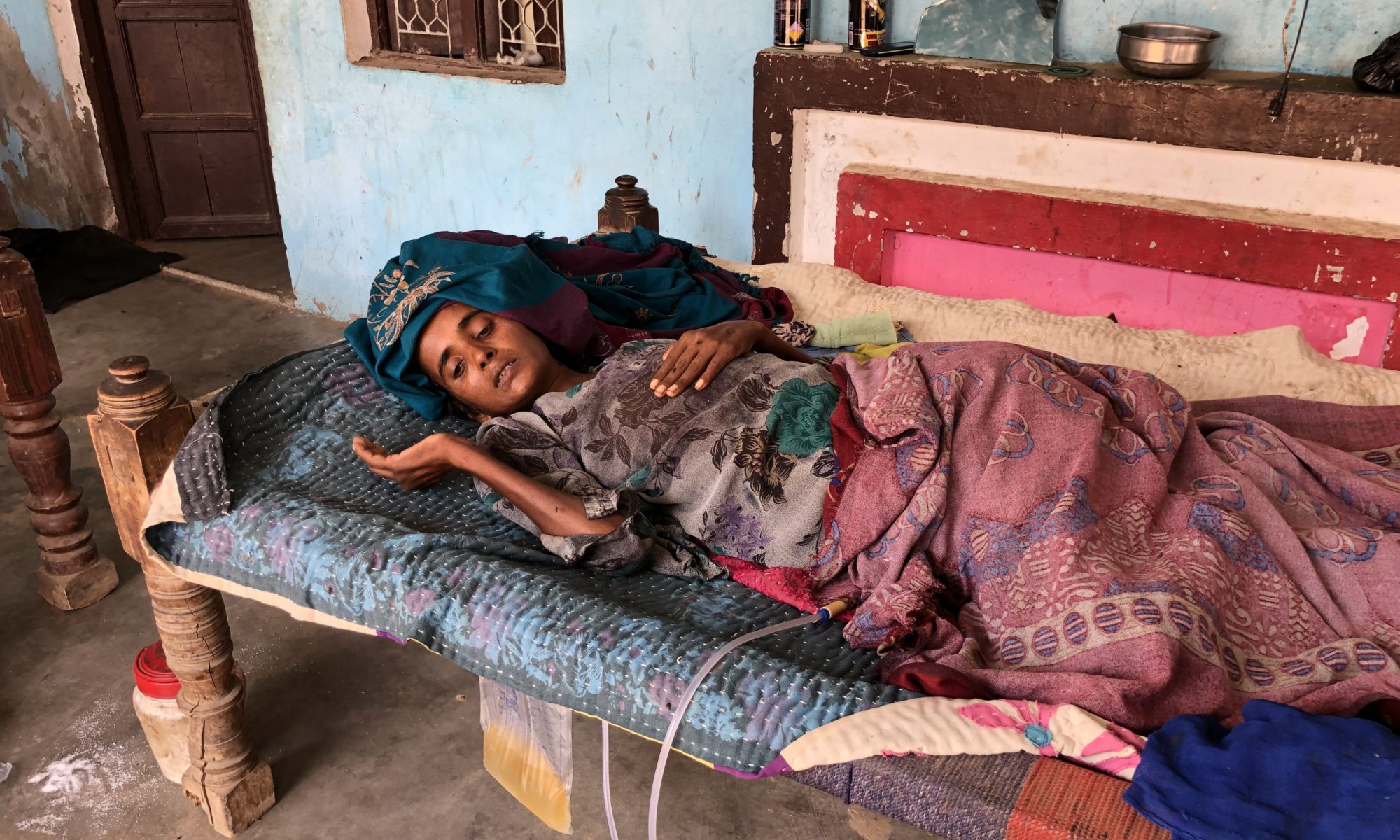 I travelled to Nuh, Haryana, India’s most backward district, to meet the widows of Pehlu Khan and Rakbar Khan, men murdered by cow vigilantes. This story was published in The Hindu.

Lying on a string cot beneath a row of pale green prayer beads that hangs from the wall, Asmeena Khan holds up a frail hand and says softly, “Please pray for me.”

There is no electricity and Asmeena cannot summon the strength to wave away the flies that settle on her face. She has been bedridden since being in a car accident four months ago. Her brother says the doctors have said she is paralysed from the waist down, and will never walk again.

Asmeena is the widow of Rakbar Khan, the dairy farmer who was killed by cow vigilantes on the night of July 20, 2018. After the murder of 28-year-old Rakbar, Asmeena, who has never been to school and is unsure even of her age, was left to raise her seven children. The eldest, 14-year-old Saahila, dropped out of school to help her mother with household chores and add to the family income by working as a daily wage labourer; four younger children were enrolled at a residential school in Aligarh run by a charitable society. The youngest two, aged six and three, have stayed with their mother in Tapkan village in Haryana’s Nuh district.

When the accident happened. Asmeena was on her way to visit her children in Aligarh in a taxi. A truck collided with the car she was in. The driver and a 19-year-old niece accompanying Asmeena were killed. Asmeena was first taken to the medical college in Nuh and then referred to a hospital in New Delhi, as her injuries were serious.

Four months later, she still lies on a cot in her parent’s home. Rakbar’s parents have refused to take her in, says her brother Irfan. But, reasons Asmeena, “Rakbar’s father is an old man who barely makes ends meet by keeping a few goats. Rakbar’s brothers add to his income, but he can barely feed himself.”

Asmeena got married when she was about 13. Three of her brothers work as drivers, two work in a poultry farm, and the youngest has dropped out of school and is learning to repair tyre punctures. Seventeen family members live in the two-room house at Tapkan. Two married sisters are visiting; they have come to find work as daily wage labourers, harvesting the ripened wheat in Nuh’s farms.

Haryana’s Nuh district (earlier called Mewat), is just 75 km from Delhi and is part of the Gurgaon Parliamentary constituency. It is India’s ‘most backward district’, according to a 2018 ranking by Niti Aayog of 101 districts. The districts were graded on five parameters — health and nutrition, education, agriculture and water resources, financial inclusion and skill development, and basic infrastructure. Nuh came last.

The place has also seen some of the country’s most horrific hate crimes, tracked since 2012 by data journalism website IndiaSpend. In September 2016, a 20-year-old Muslim woman and her 14-year-old cousin were gang-raped and two other members of the family murdered by four men because the family had allegedly eaten beef.

A few days earlier, the Haryana Cow Welfare Commission chairman, Bhani Ram Mangla, had said the Haryana police would ‘check’ biryani dishes to ensure they don’t contain beef, which is banned in the State.

The Haryana Gauvansh Sanrakshan and Gausamvardhan Act of 2015 punishes anyone for possessing beef, or transporting / slaughtering cows, with up to 10 years in jail and a fine of up to ₹1 lakh. In Nuh, 792 such FIRs were registered between November 2015 and March 2019. In that period, 1,194 arrests were made.

But the lynchings seem to continue, despite a Supreme Court judgment last year that said “mob vigilantism and mob violence have to be prevented by the governments by taking strict action and by the vigil society who ought to report such incidents to the state machinery and the police instead of taking the law into their own hands.”

Rakbar was murdered when he was walking back with his friend Aslam from Alwar in Rajasthan after buying cattle. Confronted by a group of gau rakshaksnear Lalawandi village, Aslam managed to run and hide, but Rakbar was severely beaten. The last photograph of him, shot in police custody, shows him alive. But a few hours later, his post-mortem report states, he died of internal injuries. In his statement to the police, Aslam said he heard the attackers name the local MLA, Gyan Dev Ahuja of the BJP, who is on record saying cow slaughter is a bigger crime than terrorism.

Like Rakbar, Umar Khan and two others, Tahir Khan and Javed, were transporting cows from Mewat to Bharatpur in Rajasthan on November 14, 2017. While Tahir and Javed were beaten, Umar was shot dead, and his body thrown near the railway tracks in the Ramgarh area of Alwar.

The most prominent of all lynching victims is Pehlu Khan, whose widow Jaibuna continues to live in their ramshackle house in Jaisinghpur in Nuh. The 55-year-old dairy farmer had gone to Jaipur to buy cows at a cattle fair. He was attacked on April 1, 2017 when he was returning home. Despite producing relevant documents, including a bill of sale, Pehlu and five others with him, including two of his sons, were beaten up by cow vigilantes near the Jaipur-Delhi national highway. Pehlu died of his injuries on April 3 that year.

He was buried in a cemetery close to his home. A simple stone slab, painted yellow, marks his name and the date of his death but says little of the circumstances of his death, or life.

In the background is a broken-down government school that seems to symbolise much of Nuh’s own predicament. Children walk home from school carrying small plates of rice with yoghurt, their mid-day meal, to share with families. Students study here until Class VIII, after which they must shift to a senior school some 10 km away. This is when many of the girls simply drop out.

On the day I meet Jaibuna, she is alone at home. Two daughters, studying in Class VIII, have taken time off school to earn some money harvesting wheat. The energetic voices of children reciting the alphabet punctuate our conversation.

Jaibuna says she learned of her husband’s death on social media. Somebody had video-taped the ghastly lynching and put it up on Facebook. She began watching, then one of her children took the phone away. “He was still alive,” she says. She still hasn’t seen the rest of the clip.

‘Justice’ is a big word for Jaibuna, who is just trying to get on with her life. An FIR was registered against six men. But a CID inquiry, which began after sustained protests by the family and civil society, said these men were not involved. In October 2018, witnesses for Pehlu, including his two sons and their lawyer, said they were shot at while going to court to record their statements. Police have dismissed the allegation as a ‘ploy’ to get the case transferred.

For a family that works for daily wages, it can be hard to keep track of court dates and hearings. Two sons work as truck drivers and one manages the half-acre patch of land on which they grow wheat, jowar and bajra. “Nobody from the government came to visit me after what happened,” says Jaibuna. “I will never get justice from this government.”

The family still owns a few goats and buffaloes. No cow has ever been bought since Pehlu Khan’s killing.

(With inputs from Mohd Arif)

This story was published in the Sunday magazine section of The Hindu.