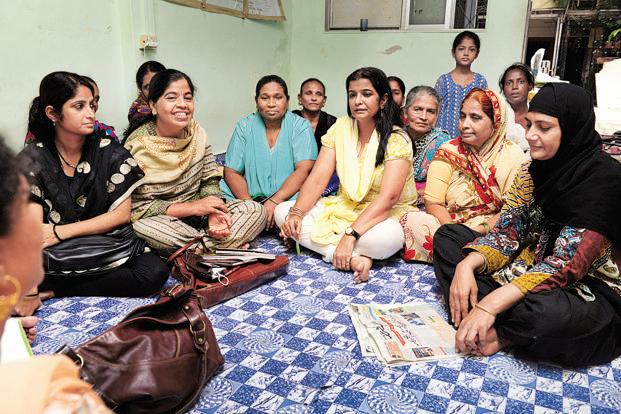 Mumbai: The women in the airy, well-lit room could be women anywhere talking of things that women often talk about. An adult son who won’t contribute to the household expenses. A daughter who is finding it difficult to adjust to married life. A husband who threatens to get a second wife.

Seated in a circle at the office of the Bharatiya Muslim Mahila Andolan (BMMA) in Mumbai, the women are looking for solutions to their problems and they are seeking them within the code of Islamic law. “Most come from poor backgrounds and do not have access to the legal system,” says Khatoon Shaikh, one of the mediators of BMMA’s Shariah Adalat that meets four days a week. “We try to solve their problems in a manner that is fair, just and in accordance with the Quran.”

A young organization with a loud voice, BMMA is one of the increasingly vocal Muslim women’s rights groups that have sprung up in recent years seeking to give space to the specific problems of women. They aim to redefine the rules of marriage, divorce and other issues in what they see as the true spirit of Islamic gender equality.

“Women have enormous rights in the Quran,” says Jaibu Nisha Reyaz Babu, chairperson of the Dindigul (Tamil Nadu)-based Manitham Trust that, like BMMA, helps resolve disputes. “But unfortunately, they are not aware of these rights.” Equally unfortunate, she says, is the clergy’s attitude. “For them, women are just second class citizens.”

Muslims in India are governed by the Muslim Personal Law (Shariat) Application Act, 1937. But since the Shariah law is not codified, it is open to interpretation by local clergy. Worse, says Noorjehan Safia Niaz, one of BMMA’s founding members, Shariah courts are steeped in patriarchy. “The clergy is on the side of the men. The social and legal system takes its cues from them to perpetrate and worsen the situation,” she says. 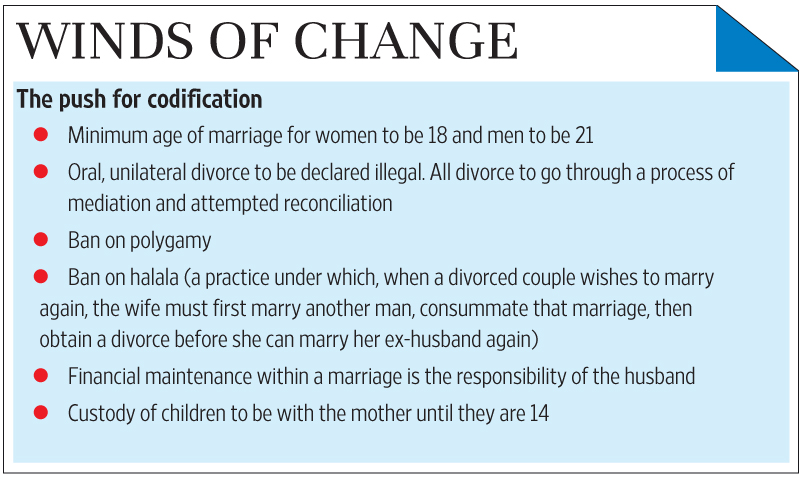 Muslim women, for instance, are vulnerable to being divorced for the flimsiest reasons. With 45,000 members across 15 states, BMMA mediates in nearly 150 cases a year, says Shaikh, and has in the past counselled a woman who was divorced because her waist was too thin and another because she attended a funeral at her mother’s house without seeking her husband’s permission.

In Lucknow, a group of women set up their own law board in 2005 after an Islamic court (darul qaza) and the All India Muslim Personal Law Board refused to intervene in a particularly heinous case of incest.

“It was strange that these men were so willing to grant unilateral divorce but so reluctant to intercede in a case that was crying for justice,” says Shaista Amber, one of the founders of the All India Muslim Women’s Personal Law Board.

In the years since, the Muslim women’s law board has evolved a model Shariah nikaahnama that gives equal rights to men and women. It also gives the wife the right to divorce if her husband has an illicit relationship or forces her to have unnatural sex. It entitles women to a separation should her husband refuse her a divorce. These are provisions, says Amber, granted by Islam.

“The Muslim Personal Law Board has no standing in the community and has allowed itself to become a vote bank for politicians,” says Amber. “They have done nothing for the upliftment of Muslims.”

The existence of progressive Muslim women’s organizations gains currency at a time when questions are being raised on the need for a uniform civil code (UCC)—a move that finds support from two disparate constituencies, the Hindu right and feminist groups. While the Hindu right wants a UCC on grounds of national integration and one law for all citizens, feminist groups argue that all personal laws discriminate against women, with women from minority communities being the worst off.

But BMMA’s Niaz says a UCC brought about by the Bharatiya Janata Party (BJP)-led National Democratic Alliance government will not inspire confidence amongst minorities. “If the BJP wants to bring a UCC, it will have to do away with all personal laws. Right now, we object to it because the Muslim community is completely under siege with (the) youth being harassed and stereotyping rife.”

“What we need is codification, not a UCC,” agrees advocate Bader Sayeed, a former chairperson of the Tamil Nadu Minorities Commission and the first woman head of the state Wakf Board. Sayeed, who filed a public interest litigation last year against triple talaq in the Madras high court, says she welcomes the recent Supreme Court observation against fatwas that trample upon the rights of individuals as well as its refusal to issue a blanket ban on parallel courts. “This is a landmark judgement that will put an end to all fatwas while recognizing the right to arbitration by parties,” she says.

Minority appeasement that fuels orthodox elements within the community at the cost of gender justice has roiled politics since Rajiv Gandhi’s Congress government diluted a Supreme Court ruling on maintenance for Shah Bano by introducing the Muslim Women (Protection of Rights on Divorce) Act in 1986. From Kerala to West Bengal, women’s groups protested the move to take away their rights, but were ignored. Ever since, the plight of Muslim women has been played out with male-dominated conservative Muslim groups claiming to speak on behalf of women.

Awaaz-e-Niswaan, the oldest feminist Muslim organization, traces its origins to the Shah Bano protests, but unlike BMMA and other organizations, is opposed to the idea of codification.

“There are instances when the court has ruled that a second Hindu wife is not a wife at all and, therefore, has no rights to maintenance,” says Hasina Khan of the Muslim Women’s Rights Network, a group of nearly 15 organizations initiated by the Awaaz-e-Niswaan. “Under the guise of codification, Muslim women should not be subject to the same plight as Hindu second wives.”

Yet, regardless of their individual differences, the newly emergent Muslim women’s rights groups fight many of the stereotypes about oppressed Muslim women as they assert their right to speak for themselves. Articulate and engaged, they are fighting for reform from within the community. With a PhD in sociology, Niaz sees no incongruity in either being Muslim or a feminist. “My Constitution allows me to practice my religion and maintain my religious identity. And Islam demands that I behave like a responsible citizen of my country. There is no contradiction,” she says.

Reform will come from within the community, adds Amber: “In one hand I hold the Constitution of India and in the other I hold the Quran.”

And in both lie the conviction of belief and the hope for change.

See the article in Mint